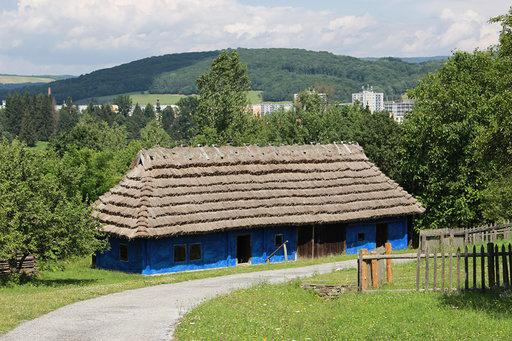 The open-air ethnographic exposition of the Slovak National Museum (SNM) – Artefacts of the material and spiritual folk culture of Ukrainians and Ruthenians/Lemkos are gathered in this open-air ethnographic exposition. Groups of picturesque, thatched and shingled rural homes from the north-eastern part of Slovakia occupy an area of approximately 11 ha. The characteristic landscape of small villages includes both farm dwellings and various other farming buildings, such as wells, barns, hay sheds and pig sties. Part of the exhibition is the so-called “carters’ inn” from the second half of the 19th century. The exposition also has an interesting part dedicated to technical buildings, represented by a water-mill, a water sawmill, a smithery, a fire station and a school. Every year, the open-air museum is used as the venue for the so-called folk and ethnographic programs called “Treasures of the people”. These events are part of the traditional Days of the Culture of Ruthenians/Lemkos and Ukrainians in Slovakia, held in June. They take place in the Svidník amphitheatre. In addition to that, every September the open-air museum organises Days of Folk Traditions and an international competition in making pierogi.