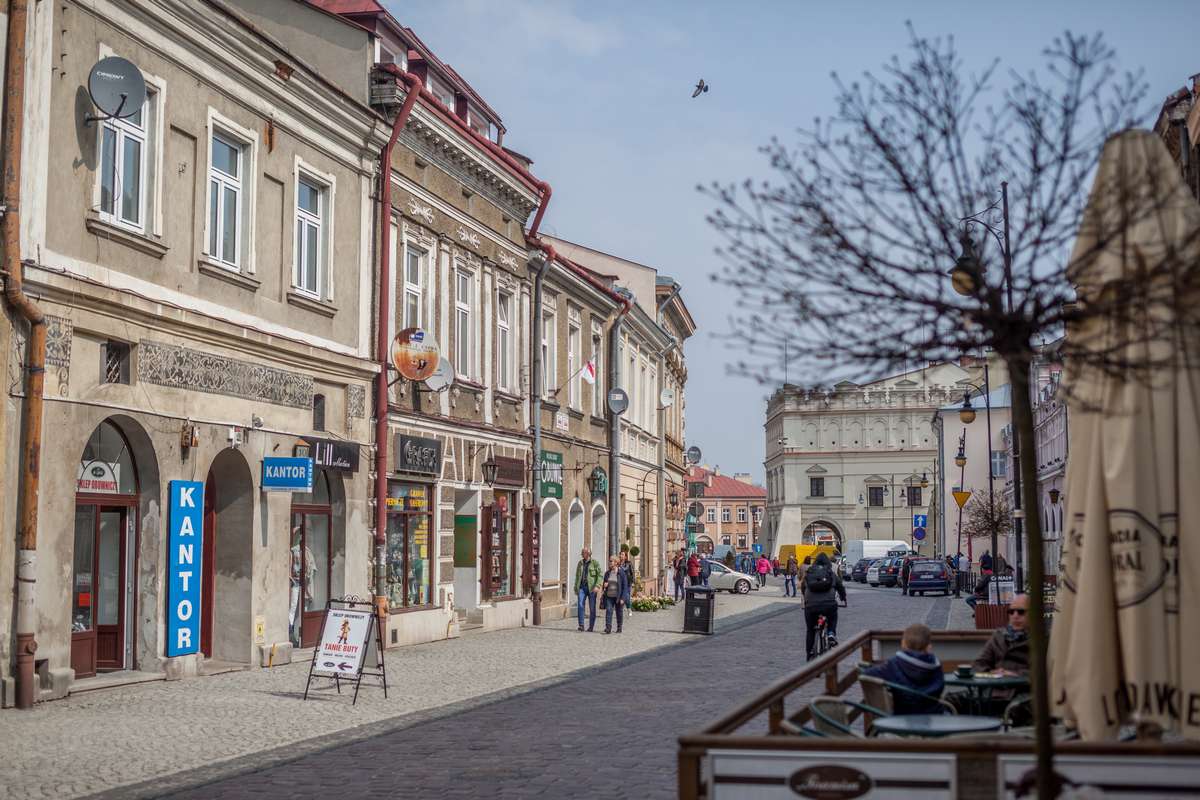 One of the city’s main arteries, Grodzka street is also one of the most representative streets. It connects the Old Town to the downtown area. The name of the street changed several times. Originally called Krakowska, it was later renamed as Niemiecka (German). The current name comes from the word “gród”, meaning “burgh, gord, fortified settlement”. Before, all tenement houses along Grodzka had arcades or attics. Since the beginning of its existence, this densely built-up street has been a place of trade and various services.

Tenement no. 4 features some of the oldest wall paintings in Jarosław. These are 12th century oval medallions depicting the four Evangelists. Richly decorated, they were discovered in 1991. The ceiling has a cartouche with a white eagle wearing a crown. The room with the wall paintings could have served as the office of the mayor office scribe, Stanisław Andredes, to whom this house likely belonged. It is possible that the author of the wall paintings was Jan Piechnikowicz, the son-in-law of Andredes. 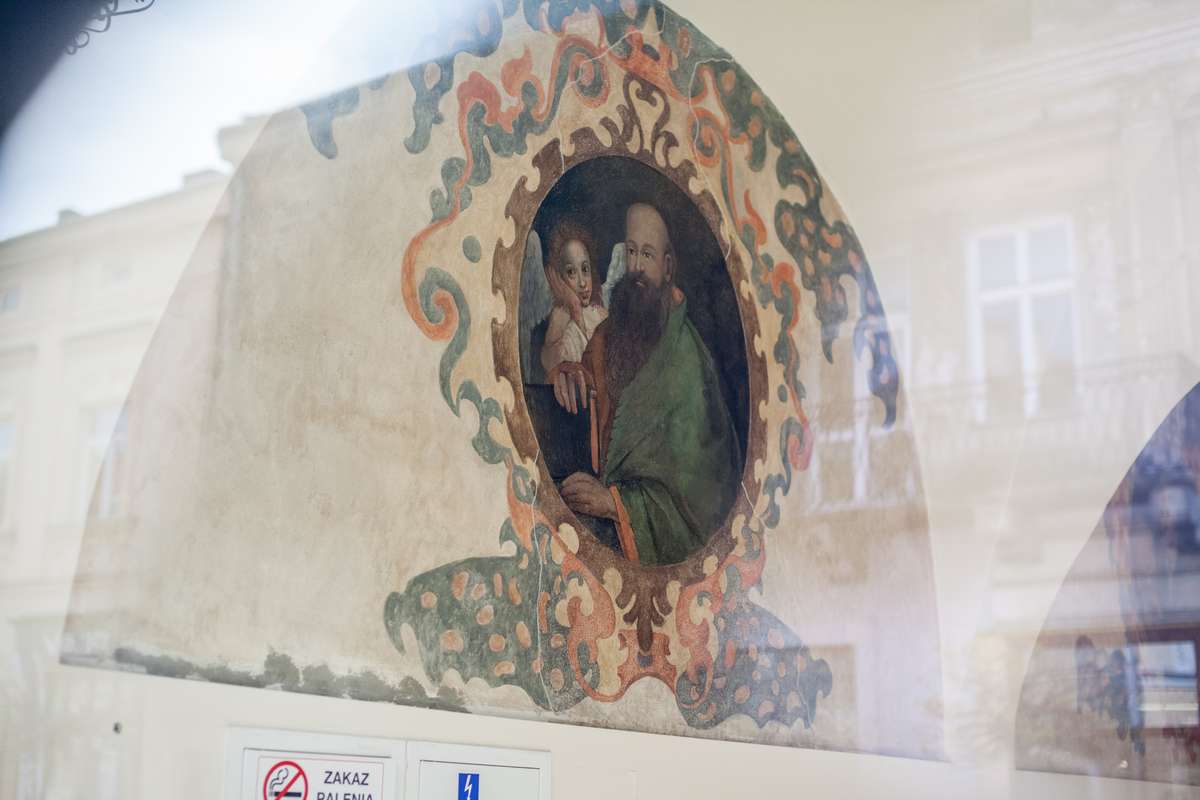 Tenement no. 7 is Poland’s only example of a burgher house with a sundial. This is a very rare example of a clock which indicated the time of prayer. Regardless of its actual duration, the hours divided the day unevenly into eight or twelve secular hours. Only a segment of the fifth of the dial plate with a visible Roman numeral XII and a support for the hand survived. 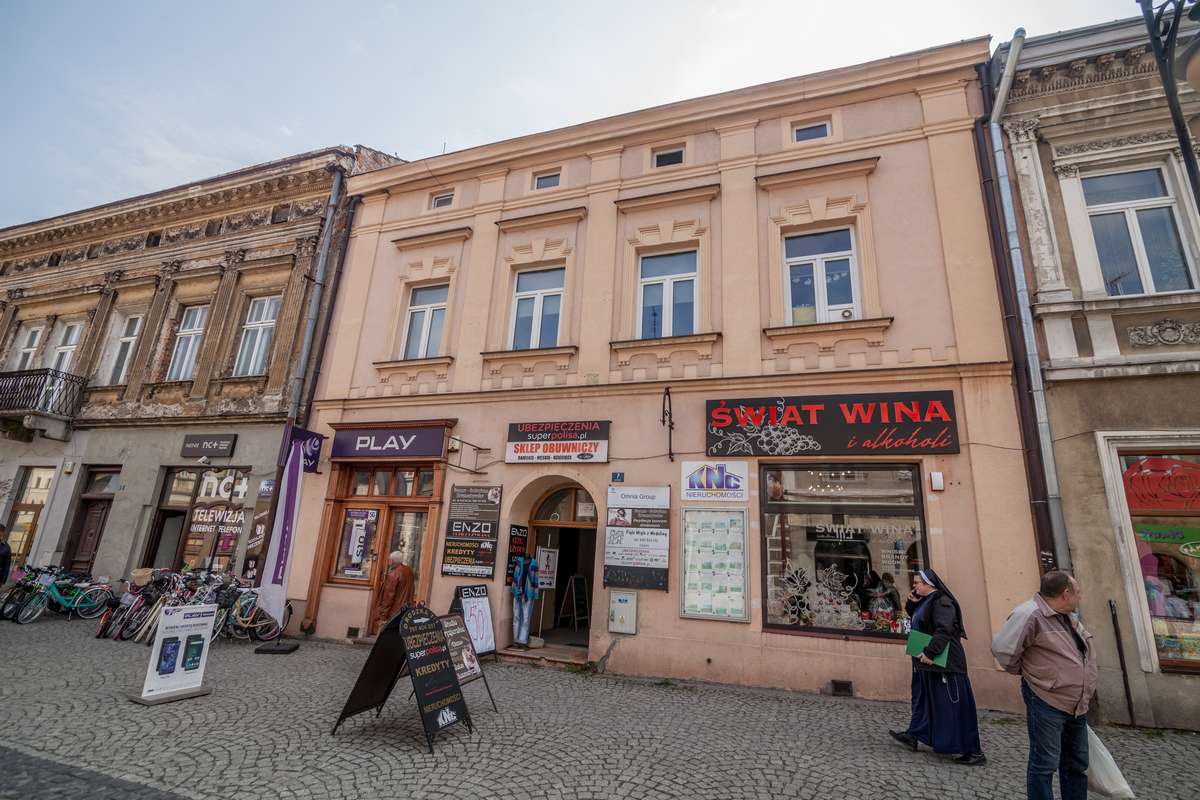 On the façade of tenement no. 10 we can see a rare frieze featuring a Renaissance arabesque with the pine cone ornament and an opened pomegranate in rhythmic repetition. This decoration was made using the sgraffito technique. 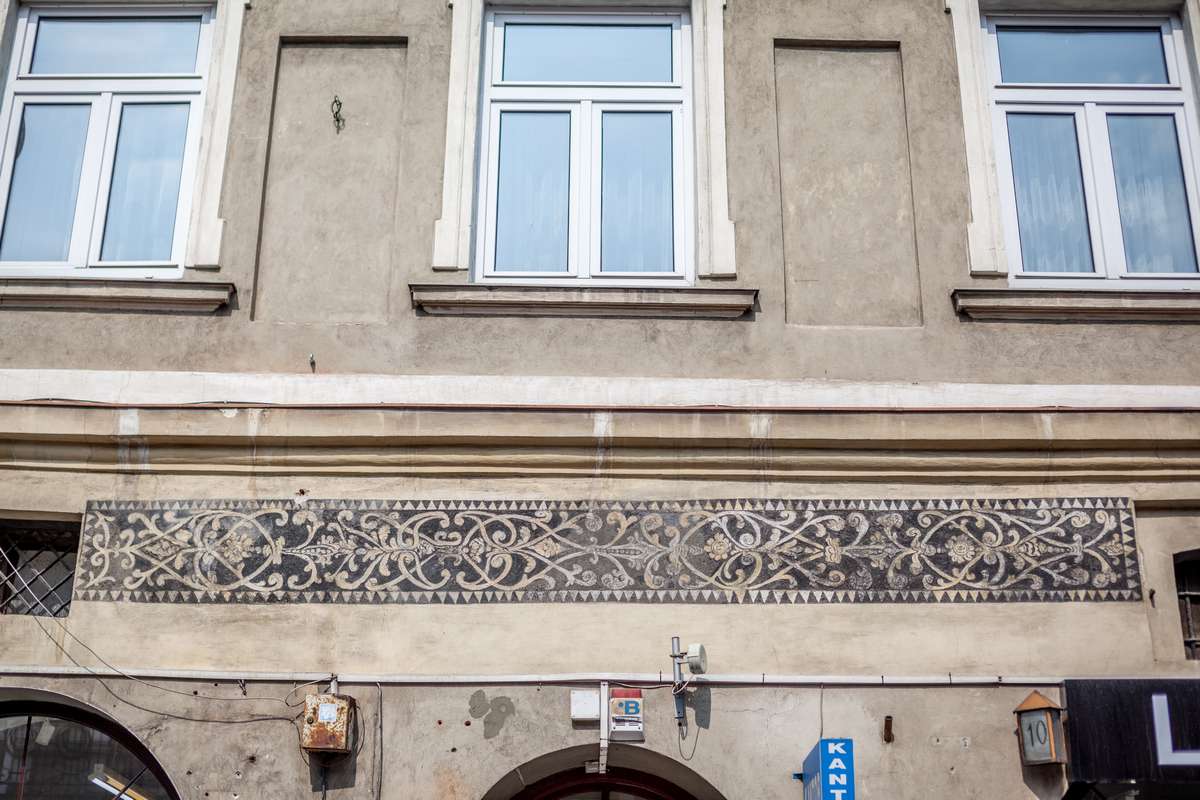 Tenement no. 13 was where the family of Sam Spiegel used to live. Born on 11 November 1901, Spiegel was later known as the producer of such films as The Bridge over the River Kwai and Lawrence of Arabia. He came from a local Jewish family. His father Szymon Spiegel was a tobacco wholesaler, while his mother Regina worked as a housewife. 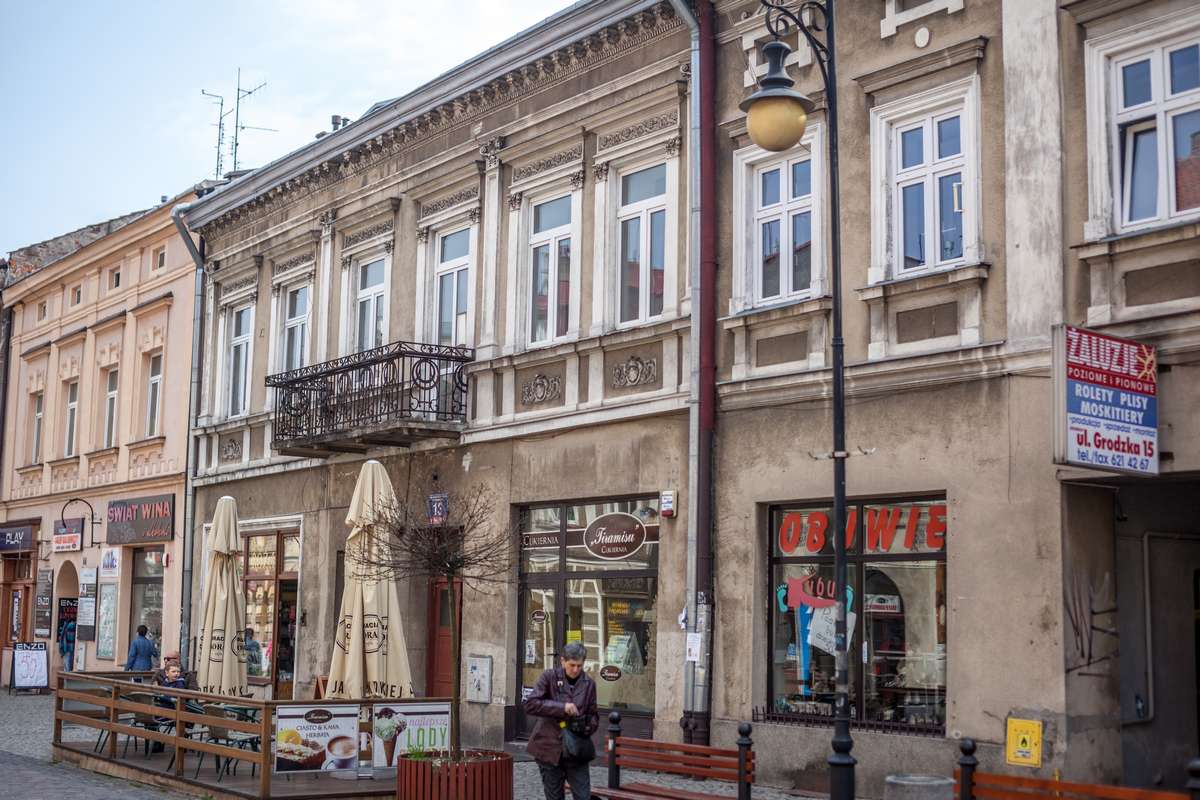 Between tenements no. 15 and 17, you can see the narrowest tenement house in Jarosław, measuring only 2.5 m in width. Both the ground floor and the first floor each only have one room.

The establishments in 16th and 17th century Grodzka street were the beating heart of the intellectual life of the town. They also testified to its material standing. Jan Szeliga had his printing office here, and Andrzej Cichończyk his bookstore. The bookbinder Maciej Szymańczyk ran his business here too. The first Jewish printing house and bookstore in Jarosław were also situated in Grodzka street, run by Salomon Baumgarten. 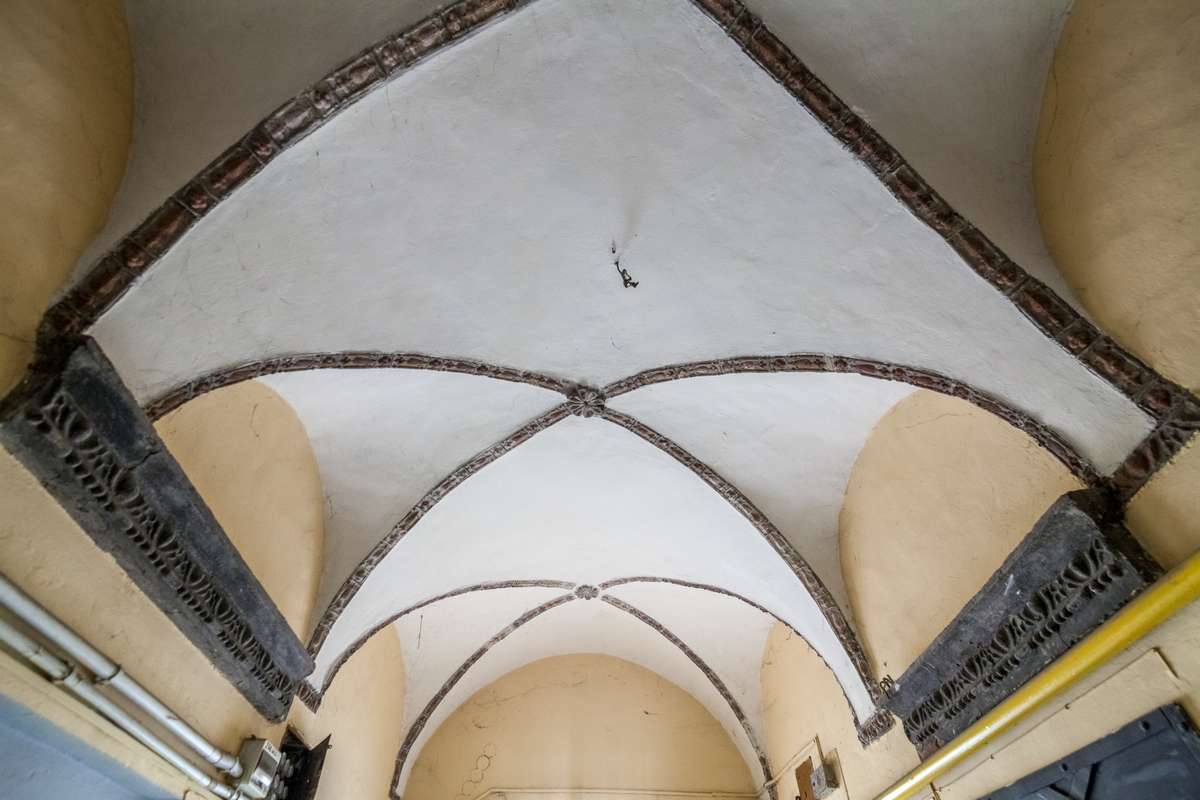